Despite the popularity Bengal cats have gained in recent years, research on their particular diseases and behavior is still limited.

The Bengal cat resulted from the crossing of the Asian leopard wild cat (Prionailurus bengalensis or Felis bengalensis) with the American or European cat (Felis silvestris catus) with short hair or the Egyptian Mau. The first mention of this newly created breed was made in 1889 by Harrison William Weir, a British artist who organized cat shows and is also known as "The Father of the Cat Fancy". (1)

A more in depth breed history can be found at:

History of the Bengal Cat

Asian leopard cats are small wild cats native to Southeast Asia and are known for their wild appearance and slim body. Researchers believe that the Asian leopard cat is one of the least tamed wild cats because it does not exhibit any social behavior towards those who care for them.

The proportion of wild feline genes expressed in Bengal cats is unknown, although it is thought to be small.

The different generations of Bengal cats are noted F (filial) plus the generation number. For example, the crossing of an Asian leopard cat with a domestic cat will result in the first generation of hybrids and will be marked with F1, while F2 will be the result of crossing F1 with a domestic cat. But this seems to be incorrectly noted. In fact, later generations resulting from F1 are marked with G (G2, G3, G4, etc.), and this is due to the fact that F1 males are infertile.

According to researchers, it is believed that first-generation Bengal cats are more likely to have a behavior closer to the Asian leopard cat. Therefore, only from the F4 (G4) generation onwards the Bengal cat will be considered domestic.

Due to the strong preference of breeders for typical wild color models in Bengal cats, which also have an alleged genetic link to certain wild behavior traits - (they are crossed especially for these color models) - it is believed that a small percentage of the Asian leopard cat wild genes can be transmitted to the Bengal cat. This could explain the wild behavior of Bengal cats.

Regarding the behavior of these little felines, a study of 256 Bengal cats performed in Belgium and the Netherlands focused on exploring health and behavioral problems as seen by their owners. (2)

60.5% of the cat owners chose this breed for the combination of appearance and character.

Normal behavior in Bengal cats according to the study

Behaviorally, for 229 cats the most common was climbing, vocalizing (227 cats), playing with water (204 cats), and hunting for 202 cats. These behaviors were not considered problematic by their owners.

Although it is considered a typical behavior for all cats, vocalization has raised issues for some owners (as is shown in other studies).

The owners of 160 cats said that their pet likes close contact, such as being held in their arms or sitting on their lap.

Problematic behavior in Bengal cats according to the study

Destructive and runaway-like behavior occurred in 14 of 124 cats who were left alone for 6-8 hours a day during the week.

Regarding pica syndrome, it seems that Asian breeds are generally more prone to this behavior, but it can also occur from stress, if the kitten was weaned too early, or due to isolation. It can also be translated as frustrating hunting behavior, which can be true for Bengal cats that are born predators. In this regard, a study from 2016 showed that cats that had the opportunity to hunt outside were positively associated with the presence of pica syndrome. (3)

When it comes to aggression towards owners and improper elimination, as other studies concluded, it represents one of the top behavioral problems in Bengal cats.

While 13 cats were suspected by their owner of having a behavioral problem, only 6 had been diagnosed, of which: 3 cat owners reported aggression towards other pets (2) and humans (1), 1 cat vocalized excessively, 1 cat had an overgrooming behavior, and 1 cat urinated improperly.

The owners of 237 cats considered that their cats did not have any behavioral problems.

As well, in terms of behavior, the differences between generations (early or later) or indoor/outdoor cats were imperceptible.

Table 1. Problematic and non-problematic behavior of Bengal cats according to their owner from a total of 256 cats (After Martos Martinez-Caja, Rosseau, Vervaecke, & Moons, 2020).

In the same study, the owners of 195 Bengal cats reported that their cat had no health problems, 24 said that their pet had a breed-specific medical condition, and 30 reported that their cat had other conditions (gastrointestinal and autoimmune being the most common). Of these, only 2 cats had more than one condition: one was overweight and had fertility problems, and the other suffered from progressive retinal atrophy (PRA-b) and blindness (most likely, the two were related).

According to other authors, decreased fertility in Bengal cats may persist until the 29th generation.

Table 2. Bengal cats health issues according to their owner from a total of 256 cats (After Martos Martinez-Caja, Rosseau, Vervaecke, & Moons, 2020). 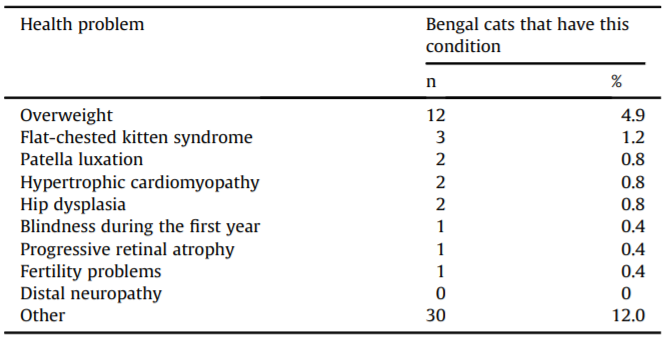 In the present study, it is clear that the normal behaviors Bengal cats expressed were typical for this breed, especially climbing and hunting.

The most problematic behaviors in Bengal cats are improper urination, spraying, and aggression toward humans.

However, some behavioral issues, even if not considered problematic by the owners, can raise some issues.

In terms of health, it seems that the most common condition found in Bengal cats is obesity (in the selected group).

Also, the need for in-depth studies on understanding the behavior and health problems of Bengal cats is still high.