The Bengal cat, often chosen for its wild color patterns but also its character, is a cat breed that has become more and more popular among cat lovers and breeders. The diseases studies to which these pets are prone (hereditary or acquired) are still limited, and more in-depth research on this matter is required.

Flat-chested kitten syndrome is a disease in which the kitten develops a compression of the chest that is due to partial lung collapse/atelectasis (incomplete expansion of the lungs). It targets only the soft tissues and is not caused by bone (or vertebral) malformations.
It has two forms: mild and extreme. In the mild form, only the underside part of the thorax deforms, becoming flattened (dorsoventral flattening), while in the extreme form, the whole thorax is flattened, and the kitten looks as if it has been stepped on.

These two conditions are the most common birth defects and are often confused with one another. FCKS is not the same as PE. Pectus excavatum (PE) is a dorsoventral narrowing of the thoracic cavity that affects the sternum (breastbone) and costal cartilage. This narrowing begins around the 5th/6th rib, but there are also severe cases, which comprise the 10th thoracic vertebrae.
A study conducted in 2012 found an increased incidence (12 out of 244 Bengal cats) of thoracic wall deformity, namely pectus excavatum (5 cats), unilateral thoracic wall concavity (6 cats), and scoliosis (one cat). In the affected kittens, five-generation pedigrees were analyzed. The result showed a high degree of common ancestry, which indicates the probability of a familial (hereditary) cause. (1)
Unlike FCKS, where partial lung collapse is responsible for the onset of the medical condition, in PE, lung collapse may be a consequence. Also, FCKS can be accompanied by PE.
Due to a lack of literature or perhaps inexperienced veterinarians, FCKS is often mistaken for PE and, therefore, misdiagnosed.

This medical condition has been reported in all breeds, including Bengal cats, and those without pedigree.
A study conducted in Sweden in 2017 in Bengal cats (138 litters) showed that they have a higher prevalence for thoracic malformations (6% out of 566 kittens) than the Domestic Short Hair. Of the kittens with thoracic malformations, 36% died in the first 4 weeks of life. (2)
There is no gender predisposition (although the study from Sweden reported a greater prevalence in males), and it only affects (especially) newborn kittens and sometimes older ones (10 days or so).

How and why FCKS occurs?

What leads to the flat-chested syndrome in kittens is lung collapse or atelectasis, among many other causes. Atelectasis in newborn kittens, in turn, is caused by bronchial obstruction, the absence of the substance secreted by the alveoli, or insufficient breathing immediately after birth. It can also advance (extend) to the surface of the lung if the kitten's respiratory rate decreases (e.g. when sleeping).
Other causes are represented by: kittens that come from large litters, therefore, they are undeveloped; herpes virus; lung infection; diaphragmatic hernia or spasm; pneumonia; breeding two barrel-chested cats.
A less common cause of FCKS is represented by hyaline membrane disease or respiratory distress syndrome, which is an acute lung disease in premature-born cats, caused by inadequate surfactant secretion by type II pneumocytes (lung cells).
In addition, tumors or inhaled foreign objects may cause atelectasis by obstructing the airways.
FCKS may also occur in older kittens (10-day-old) that are not strong enough to breathe through the mucus left in the airways or who have inhaled milk during feeding. Cat breeders should take note of the fact that it would be good for the kitten to cry loudly at birth to draw as much air into the lungs as possible and to ensure that their airways are free (with no residual fluid left). This is why kittens (and puppies) are shaken with their head down when they are newborns, in order to drain the residual fluid left in their respiratory system!
Older cats have strong enough ribs and developed intercostal muscles, which will not allow the rib cage to collapse, unlike kittens, where the bones are softer and more flexible, and the muscles and tendons are still developing. 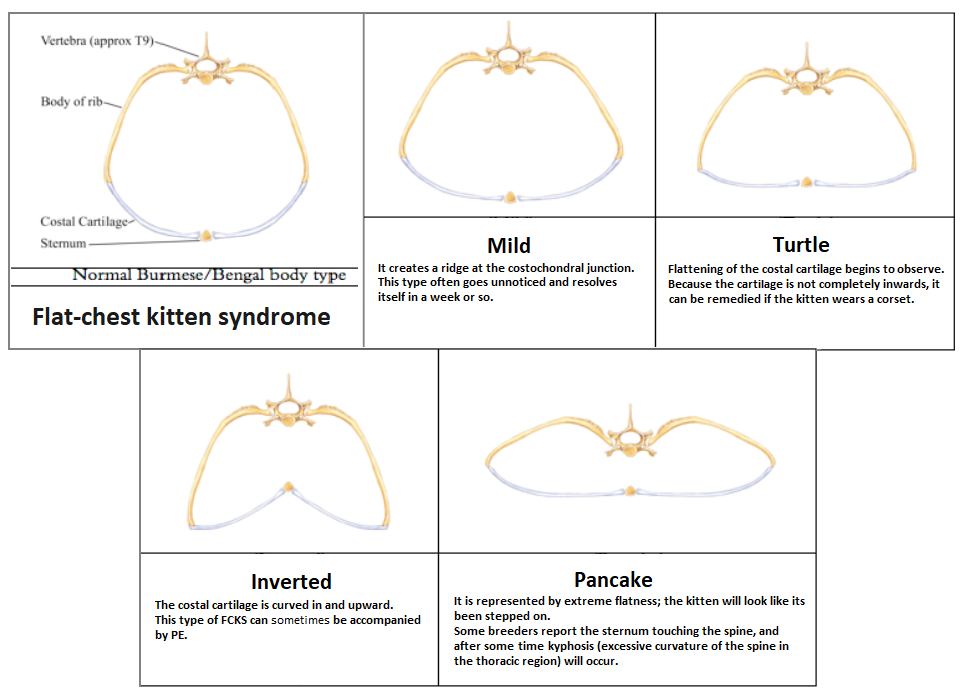 It is not excluded that FCKS also occurs due to recessive inheritance (one mutation inherited from each parent). Although this is very rare, the main indication is that whole litters or large portions of litters are born with these malformations.
It appears that some adults that recovered from FCKS have produced offspring with FCKS. Also, some queens will constantly produce kittens with FCKS, therefore, breeding them is not recommended. However, repeated reproduction between these cats does not lead to more kittens suffering from FCKS than non-repeat matings.

The most obvious physical sign is the abnormal shape of the rib cage, which is often flattened. Other deformities such as PE, kyphosis, or lordosis may also be present. Clinical signs include respiratory failure, dyspnea, cough, cyanosis (blue coloration of the skin and mucous membranes, which occurs due to an inadequate amount of oxygen in the blood), intolerance to exercise, vomiting, and reduced activity.
Occasionally, a heart murmur may be heard on auscultation; it occurs due to a lack of space in the chest cavity.

Kittens that suffer mild forms of FCKS can heal spontaneously on their own. Intermediate forms can be treated by putting the kitten in a corset for about two weeks. There is no treatment for extreme forms.
Cats suffering from FCKS may die or need to be euthanized within a few days of the onset of the disease. Usually, around the age of 10 days or 3 weeks, the kitten's condition will get worse. Kittens that have reached the 3-week threshold have a favorable prognosis. If it does not heal on its own until that age, in kittens that still have a deformity, it can heal on its own in the next six months.
Assisted feeding also seems to be a key condition in helping the kitten gain weight, hoping that FCKS will resolve on its own in 3-4 weeks.
Kittens that have suffered from mild to intermediate FCKS seem to lead a normal life without influencing their life expectancy.
A small proportion of those suffering from extreme FCKS will have long-term respiratory problems, kyphosis, and in some cases, heart problems (due to chest compression/lack of space, especially when FCKS is accompanied by PE).