Like most pedigree breeds, Bengal cats can suffer from hereditary diseases. This breed of cats is currently being tested for three genetic diseases, such as hypertrophic cardiomyopathy (HCM), progressive retinal atrophy (PRA), and pyruvate kinase deficiency (PK-def). These tests can help prevent the transmission of these diseases to their offspring, contributing to their well-being and prolonging their life.

What is there to know about progressive retinal atrophy?

Progressive retinal atrophy is a hereditary disease that causes retinal degeneration and atrophy by affecting the photoreceptor cells (with cones and rods), which leads to bilateral blindness (in both eyes). This disease is called progressive because it starts around the age of 7 weeks and develops slowly until the age of 2 years, most cats becoming completely blind until the age of 5 (at the latest). Cat breeds prone to this disease include Siamese, Persian, Abyssinian, American cat curl, Tonkinese, American wirehair, Bengal (hence the "b" from PRA-b), and others.  It has two main forms, namely retinal dysplasia, which is the early onset (it appears around the age of 2-3 months), and progressive retinal atrophy, which is the late onset.

How and why PRA-b occurs?

Although it is believed that this condition is caused by a single mutation in the CEP290 gene, researchers came to a different conclusion.

CEP290 gene is known to be responsible for PRA in Abyssinian cats, a gene that provides instructions for producing a protein that is present in many cell types and plays an important role in cellular structures called centrosomes and cilia. Cilia (finger-shaped microscopic projections on the surface of a cell), among other implications, play a role in the perception of sensory input, such as sight, smell, and hearing. In other words, this gene targets the cells with cones and rods in the retina, which play a role in reflecting light and providing the ability to see.

Giving the fact that the Abyssinian breed was used to found the Bengal cat, it was also believed to present a risk for CEP290 and CRX variants, variants that lead to the occurrence of PRA in Abyssinian cats. After analyzing these mutations (CEP290 and CRX), the researchers found that these two variants are not responsible for progressive retinal atrophy in Bengal cats, but other variants of these genes may be present. The variant responsible for PRA-b can be derived from domestic or wild feline progenitors. (Ron Ofri et. al, 2015)

The mode this gene is inherited is autosomal recessive, which means that PRA develops if the cat inherits two copies of the mutation (homozygous), one from the father and one from the mother. Cats that have only one mutation (heterozygous) are called carriers and do not get the disease (they have normal eyesight), but they can pass it on to their offspring if they are bred with another cat with a mutant gene - one gene from the mother with one gene from the father results or not in an offspring with two mutant genes that will develop PRA over time – there is a 25% chance that the offspring will be affected. Carrier cats can be reproduces, but only with partners who do not carry the mutant gene.

PRA is a painless condition, being rarely observed from the first stages of development. As it evolves, the cat will start to lose its sight at night (night vision will be affected). The cat will be nervous, reluctant about dark rooms, and/or will start hitting objects around the house when the light is dim. Their pupils will be more dilated than normal, and at night their eyes will be very reflective when the light strikes them (seen through the pupil). Also they will tend to position their whiskers forward. Sometimes these clinical signs are not noticed when the cat lives in the same environment, the owners realizing there is something wrong with their pet when it is completely blind.

At the fundus examination (ophthalmological examination that allows the visualization of the optic papilla, retina and its vessels) the initial signs of the disease (retinal changes) begin to appear from the age of 8-20 weeks. With increasing age, these modifications will become more obvious. At 40-60 weeks of age, complete retinal degeneration begins to be observed, accompanied by other retinal changes, including the absence of perceptible retinal arterioles or venules. 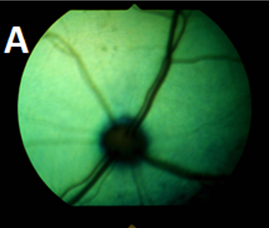 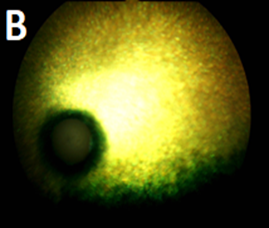 A – Fundus examination, 8 weeks old kitten. The presence of retinal arterioles and venules,

B – Fundus examination, 62 weeks old cat. The absence of retinal arterioles and venules.

If the owner notices the initial clinical signs, then a fundus examination and/or electroretinography will show some retinal modifications. Electroretinography uses light flashes to assess the functionality of the photoreceptor cells (with cones and rods) of the eye during stimulation. Other ophthalmologic tests that can help diagnose PRA are tonometry (it measures the intraocular pressure), fluorescein staining (to detect eye trauma), Schirmer test (it evaluates tear production), pupillary light reflex test (placing light in the eyes to observe the dilation and contractions of the pupil). These tests will also help make a correct differential diagnosis.

There is no treatment for this medical condition.

What are the recommendations for testing and reproduction?

Cats suffering from PRA will not be used for reproduction, and those without clinical signs will be genetically tested beforehand because they may be carriers.

N/N – cats with this genotype do not have PRA and cannot transmit this variant to their offspring; as a result, they can be mated with N/N or N/PRA partners.

N/PRA – cats with this genotype have only one mutation and are carriers. They can only be mated with N/N partners. Breeding them with another N/PRA cat will have a 25% chance that their offspring will be born with both mutations.

PRA/PRA – these cats have both mutations, so they suffer from PRA. Therefore, they must not be mated because they will pass this variant on to all offspring.

An example Test Report is shown below
Ava_pra